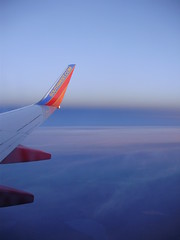 Having used up all my vacation days this year for the Ottawa/Montreal trip, I worked a half day before driving to LAX to start my haiku weekend adventure. It was a low-budget weekend getaway, which meant I was flying out of LAX via Southwest, but returning to Ontario via Alaska Airlines.

itinerary complications...
I watch pelicans fly
in a line

Genie Nakano was leaving LAX at the same time but arriving in Seattle an hour and a half earlier, due to my plane change in Sacramento. But, the plane had a flat tire! So, I quickly switched to an earlier flight but didn't know there was only one plane to Seattle from Sacramento.

Genie was waiting at the gate, we picked up her rental car and began the rainy drive to Seabeck. It takes an hour and fifteen minutes to drive there from SeaTac. Genie's GPS directed us through a back entrance which made it ridiculously difficult to find the conference center. Once on the grounds, we were christened with Pacific Northwest rain as we tried to find the right retreat group.

It was like coming home. So many of my favorite haiku poets were there - Naia and Billie Dee from Southern California, Penny Harter from New Jersey, Susan Constable and Vicki McCullough from Canada, and all the wonderful Washington Haiku poets...Michael Dylan Welch, Christopher Herold, Karma Tenzing Wangchuk, Tanya McDonald, Alice Frampton, Carole MacRury, and many, many more. Even more poets were due to arrive the next day.

We arrived in time for the "favorite haiku" session. Each participant was to bring a favorite haiku and be preparied to explain why we selected it. I sat next to Christopher Herold and coincidentally planned to talk about his "foghorn" haiku, which can be found online in Christopher's Three Questions interview on Blogging Along Tobacco Road.

This made for an interesting discussion. I talked about what I was doing when I read the haiku for the first time (I was on the Bremerton/Seattle ferry), my experiences with kayaking, and how I think a foghorn sounds ancient and lonely and scary. How I see a foghorn as a metaphor for fear. How lowering a kayak into the sound of that fear evokes a sense of embracing my fears, of gathering the courage to face them. Christopher spoke after me and thought it was interesting that I got the "embracing your fears" angle from the haiku, because it was actually there in its genesis. He talked about a particular kayak trip he took with his wife, who was afraid at the time of being on the water in a kayak. How she came to love it and afterwards they bought a kayak and continued to take kayak trips together. How he came to write that haiku.

Next, Carole MacRury gave a slide show of her photographs and then Michael Dylan Welch and Tanya McDonald conducted an anonymous haiku workshop that went into the wee hours of the morning. It was a wonderful way to start a great haiku getaway weekend.
Collapse