On Saturday, Naia and I were determined to make one more trip to the Scone Witch before venturing over to the Archives for what was to be my final day at Haiku North America.

My first stop after scone heaven was a workshop by Roberta Beary and Lenard Moore: Navigating Crosscurrents in the Craft of Haiku: Reality in the Haiku Mind. Roberta handed out brightly colored pieces of paper and we all were asked to write a haiku we were having some trouble with. I am having so much trouble with mine that I don’t even remember what I wrote.

hot pinks and greens
a sheaf of papers
all blank

Roberta and Lenard picked haiku from our offerings for anonymous critique and discussion, and it was fun working through some of the haiku submitted, trying to make them better.

Next, I attended Margot Gallant’s presentation “Beauty, Poetry and Despair: The Crosscurrents of Big Trout Lake.” Big Trout Lake (Kitchenuhmaykoosib Inninuwug ) is part of Canada’s Aboriginal reserve system and Gallant worked there for two years as a teacher. She did a presentation of images from the First Nations community accompanied by haiku, tanka, and haibun.

I dropped in for the first half of Maggie Chula’s haibun workshop, but reluctantly left early to attend David Lanoue’s presentation on surrealistic and post-modern haiku, “Reading the New Haiku.”

One of David’s first examples was Fay Aogayi’s “red toy piano” haiku (which can be found in an essay of David’s at the Modern Haiku website. David said this haiku “pops” in an unexpected way and there was a big discussion as to what was meant by “ants out of a hole” and how it related to the red toy piano.

Fay was in the room and was interested to hear the varied interpretations of her poem. She explained that “ants out of a hole” is an early spring kigo in Japan.

The next haiku we discussed was Peter Tchouhov’s “the dolls in the attic” haiku which can be found in a review of Ginyu #28 on Gerald England’s review website.

Because of the first line “night storm,” everyone seemed to get a sort of Twilight Zone “dolls in the attic” feel from this, even though a few people suggested that he could be talking about Japanese Dharma dolls or Russian nesting dolls.

Finally, there was a discussion of Keiji Minato’s “depleted uranium” haiku which can be found online in an essay of David’s at the Haiku Foundation. Although the initial image in most people’s mind was that of a suitcase dirty bomb, David skillfully manipulated the discussion to the summer sea. Not only does this suitcase contain depleted uranium, it also contains the summer sea. And what does this mean?

David was followed by Angelee Deodhar who spoke about the “Crosscurrents of Love in Traditional Japanese Poetry,” a talk which focused primarily on tanka.

I then moved to the auditorium for Charles Trumbull’s talk “Crosscurrents: East and West: Shiki and the Origins of Shasei.” He talked about “slice of life,” “poetic truth” and how Shiki felt a poet should only use imagination after developing a sufficient understanding of reality. He compared Shiki’s philosophy to John Ruskin’s art criticism, ending with one of Shiki’s haiku:

sketching from life –
eggplants are harder to do
than pumpkins

The final presentation of the day was Jim Kacian’s talk on “Haiku as Anti-story.” Jim declared that a haiku wasn’t the story but rather a “lightning strike across it.” He then said that the very best haiku cuts across the story and the reader can see the story on both sides of the cut. I thought that was an interesting way to think about haiku.

Then, it was a rush back to the hotel to get ready for the banquet at the top of the Crown Plaza where John Brandi was the keynote speaker.

Then, we did a quick change of clothes again and walked down to the Wellington Street dock for the boat cruise. We cruised the Ottawa River, watched the fireworks from Gatineau, had a poetry reading on board, and a dance! What more could a haiku poet ask for? 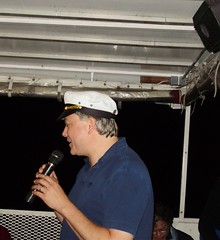