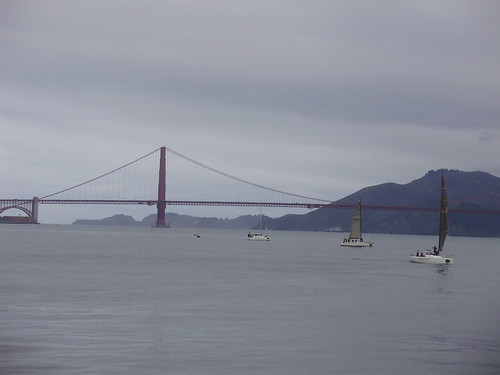 A week ago, Naia and I took a quick day trip to San Francisco for the annual Two Autumns Reading sponsored by the Haiku Poets of Northern California. It was the 20th Anniversary of the reading, a brain child of rengay inventor Garry Gay, inspired by the classic haiku:

for me who go
for you who stay
two autumns

For years this haiku has been mis-attributed to Buson, but was, in fact, written by Shiki. Michael Dylan Welch gave a short presentation on his research into this topic.

When envisioning this reading, Garry had some sort of mystical idea about incorporating the number two in various ways - there were to be two readings, two accomplished poets, two new poets, the anthology for the reading would be produced by two people, the reading starts at 2 pm, etc. As he spoke, I started doing my own arithmetic....

The reading was held, as it is each year, at the Fort Mason arts complex. Naia and I flew up on a 7:30 a.m. flight from LAX and were met at SFO by Haiga Online editor Linda Papanicolaou. The three of us drove to Fort Mason to meet a group of haiku poets at Greens for brunch. It's an absolutely amazing vegetarian restaurant with a fantastic view from the dining room. Jerry Ball, the founder of the Southern California Haiku Study Group now living in Northern California, was able to attend, making the trip even more meaningful.

We arrived early and contented ourselves by doing a photo walk, taking shots of crabs on the rocks, enjoying the sound of the halyards clanking in the marina, watching for the head of a harbor seal who was lurking around.

This was my third trip to San Francisco for this reading and what I like about it is the fact that you have a chance to hear four diverse haiku voices in some depth. Each poet has about twenty minutes and it goes very fast. The anthologies are wonderful - each poet's section contains a dozen haiku. This year's anthology was edited by Paul Miller and was called "My Neighbor" after a haiku by Garry Gay. The design and typography was done by Linda Papanicolaou and the cover artwork was done by Naia.

Michael Dylan Welch's (which include his flight & weekend visit) are here:
http://picasaweb.google.com/MichaeDylanWelch/TwoAutumnsReading2009#

Copies of various Two Autumns anthologies can be ordered from Renee Owen - reneeowen "at" globalsbc "dot" net. A listing of available anthologies is here.
Collapse