a poetic photo journal of the events of August 4, 2009

9:00 a.m. in Ottawa translates to 6:00 a.m. in California. It’s hard to believe I was up this early, eating breakfast with Naia and Emiko Miyashita.

breakfast crepes
before the wakeup call
map of a new place

One of our first stops was St. Andrew’s Presbyterian Church. 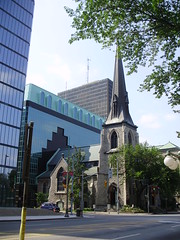 I might have missed this beautiful church if Emiko hadn’t been along to suggest we go inside. It was a surprise to discover members of the Netherlands’ Royal Family were parishioners during World War II. Church members were very proud of this connection and showed us a beautifully carved lectern, a gift of the Royal Family, and baptismal photographs of Princess Margriet.

Then, it was on to Parliament Hill.

We did not see any sign of the Parliament cats

a maple leaf
from the tower
not even a black cat 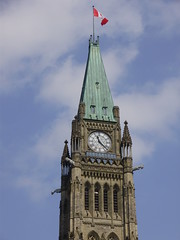 Emiko left us at the Byward Market to try to meet up with Terry Ann Carter. Meanwhile, Naia and I contentedly took dozens of photos of fruits and vegetables.

cauliflower display
a farmer tells us
his secret

Then, it was back to that fearsome spider, Maman, guarding the entrance to the National Gallery. But we didn’t let arachnophobia deter us from going inside and admiring the paintings of Tom Thomson, The Group of Seven, and Emily Carr.

We were inspired to write ephrastic poems and each of us wrote about several different paintings. We both loved Tom Thomson's The Jack Pine.

spring droops…
a jack pine alone
by the lake

After admiring the Notre Dame Cathedral Basilica, we ate lunch at Paddy Boland’s at one of the sidewalk tables.

We just barely finished before the rain came. Like the rain I experienced in Montreal, it was warm and rather pleasant. But then the thunder and lightning started. Walking in rain is one thing, walking in an electrical storm is something else. So, Naia and I browsed the shops and stopped for tea, before walking briskly back along Wellington Street to the hotel. But even dodging raindrops, we explored our surroundings. Out of the corner of our eyes, we noticed the Centennial Flame on Parliament Hill, and had to take a closer look.