Breakfast at Manoir Monk is fantastic. There’s no other way to describe it. Nibbling on sinfully good pastries and breads from Le Fromentier, sipping on fresh squeezed mango juice as I compared notes with fellow travelers, what could be better?

Momentarily disappointed with the slight drizzle, I figured I had a new umbrella, a recent gift from Seattle-area haiku poet Michael L. Evans. So, despite the rain, I set off towards Vieux Montréal by foot.

gray skies
but a blue umbrella
the skip in my step 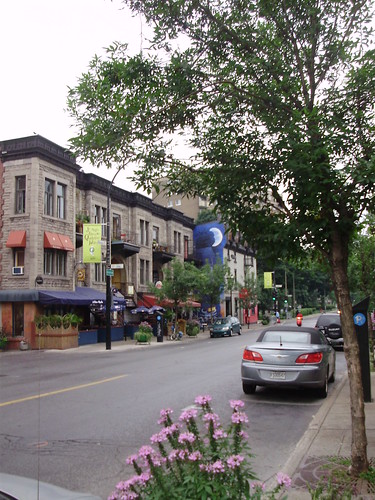 It was a soft, warm rain. Not unpleasant at all.

I had read that la Basilique Notre-Dame de Montréal was a must-see, so when my first sight of Vieux Montréal included a church, I mistakenly thought this was the basilica (even though it seemed a bit small for a basilica).

In fact, this was la chapelle Notre-Dame-de-Bon-Secours, one of the earliest churches in Montreal, built in 1771 over the ruins of the previous chapel. I went inside for a while, then walked down Rue St. Paul and wandered into Marché Bonsecours. With its silver dome and my lack of French vocabulary, I assumed it was some sort of government building. In fact, it is filled with boutique shops, craftworks, native art, restaurants, and more.

Even with gray clouds and drizzle, Old Montreal is beautiful. I loved the cobblestone streets, the smell of chocolate from bakeries, the hanging baskets of flowers outside restaurants, a street of artists selling handmade jewelry, etc.

Then, the wind picked up before I found the basilica, utterly destroying my umbrella. I bought a new Canadian umbrella, tackily decorated with maple leaves, etc. at a souvenir shop. But, at this point it was raining crocodiles, so I wasn’t picky. I took shelter in the basilica and admired the stained glass and circular staircases. A Japanese tourist told me he was on his third umbrella of the day.

The rain became light again and I ventured out towards the Old Port area.

(If you look closely, you can see the biosphere from Expo 67 in the distance)

Unfortunately, I had to abandon my plans for a cruise on the St. Lawrence River due to the weather. I wandered back, checked out the le Palais des congres de Montreal where I’d be attending WorldCon a week later, and strolling back to the B&B via Chinatown.

after the rain
I sink deeper
into the clawfoot tub
Collapse