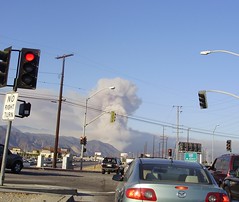 fire season
angry words we say
to each other

4:30 a.m. and I was wide awake. I had tickets for a 7:00 a.m. flight from LAX to Montreal via Chicago. My suitcase was uncharacteristically overpacked. From hiking gear to the swimsuit I never wore to formal wear for banquets, it was in there. And sweaters! What possessed me to bring sweaters? I didn't wear one the entire time I was in Canada.

Then, the books. Books to sell. Books I wanted signed. Books I needed for my speculative haiku presentation.

I balanced the suitcase on my bathroom scale, afraid to see what it would say.

packing for the trip
even my suitcase
needs a diet

After a frantic drive to the airport with my son and his friend, the plane was already boarding as I made it to the gate. There was no chance to grab as much as a muffin from the airport Starbucks.

The 737 took off over the beach, over a row of motor homes into gray marine layer. Then, suddenly light reflected off the wing. We were over a white quilted cloud layer, a huge mattress stretching to the horizon with mountains poking through like a distant headboard.

spider
on the ceiling
an unmade bed

Were we going west? We needed to head northeast but I never felt the plane turn around after taking off over the ocean. The mountains convinced me we were going the right direction. Eventually the clouds cleared near the Grand Canyon. We passed over Colorado near Durango, then Kansas and Missouri became a patchwork below us.

nine patch quilt
so many shades of green
stitched together

Before I knew it, there was the skyline of Chicago and then we were out over Lake Michigan. Hundreds of small boats were enjoying the Saturday afternoon sun. We circled back towards the city and I wondered what it would be like to live in such a place, with a Great Lake instead of an ocean.

The flight attendant started rattling off connecting flights and gate numbers. She told us there was a map of O'Hare in our InFlight magazine. Mine was ripped out. I was going to have to wing it. It wasn't that bad.

The plane to Montreal was much smaller. I was shocked to find my laptop case was too big for the baggage compartment! However, I was able to avoid checking it by removing the laptop sleeve and cramming the contents of the outer pocket into my purse. Fortunately, this flight wasn't very full so I had some room to shift things around.

Everything below me was either green or a body of water. This is very alien to my western eyes. I looked at each river and wondered - is this the St. Lawrence? Finally, I recognized Montreal below.

The taxi driver argued on his cell phone in French the entire way to my bed and breakfast. I didn't understand a single word, so I just tuned it out and enjoyed the view from the backseat window.

Manoir Monk was something out of a storybook. There are hidden doors and secret passageways, clawfoot bathtubs and comfy beds. Denis Beaulac, the proprietor, is very welcoming. Upon my arrival, he proudly gave me a tour of the house and a list of things I could do that night in Montreal.

Being by myself in a strange city where I didn't speak the dominant language, I wasn't planning on doing anything wild, but before I knew it, I was following Denis's directions to the Montreal International Fireworks Competition, walking in the streets with thousands of other people in the middle of the night. I was walking with families and couples and elderly people and everyone was speaking French, yet smiled at the non-French speaker. When I made it to the banks of the St. Lawrence River, a family made room for me and we watched the show together. Afterwards, there was no traffic jam. No snarl of cars like there is after 4th of July fireworks at the Queen Mary.

People walked, some disappearing into the metro station, and there were people all around me as I walked back to the B&B. It was a thirty minute walk. No one in LA walks 30 minutes at 11:00 p.m. Restaurants were still open and people were sitting at outdoor tables lining the sidewalks.

It felt liberating. This is the moment I fell in love with Montreal.
Collapse