Today was another completely amazing day in a series of amazing days I've been having since I arrived in Canada. A full accounting of my Canadian adventures will have to wait until I have a better way of using the internet than on a shared computer in a hotel lobby. I hear there are some internet cafes around here that I could lug my laptop to, but there just doesn't seem to be time to squeeze something like that in. But, I will do my best to give you a sense of today.

We started off with a "Changing of the Guard" ginko walk on Parliament Hill. Parliament Hill is spectacular enough without the pretty soldiers marching around in lines on the lawn, but with the band and the bagpipes and the bayonets, it's even more so.

Afterwards I headed over to the Byward Market to grab a bite to eat before getting mentally prepared for my afternoon presentation. In front of the main market building, they were advertising "Obama cookies." 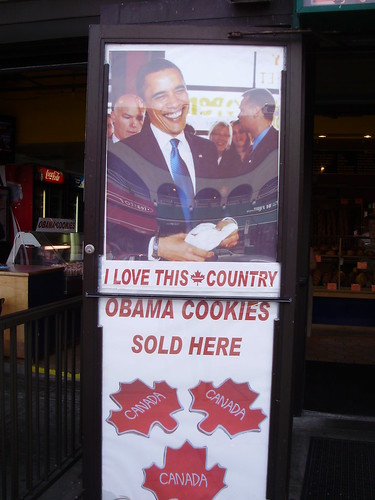 Before I knew it, it was time for my presentation. I was pleasantly surprised by the turnout, considering it was immediately after lunch and people were wandering all over the city sightseeing after the ginko walk. I was also up against Bruce Ross's talk on "Basho, Sunthorn Pho and Contemporary World Travel Haibun." After a few mishaps with the projector system, I got my powerpoint presentation up on the screen and it was fairly smooth sailing afterwards. At one point, Paul MacNeil asked me to bend my head so he could pick a ladybug off me (that I didn't know was even there), but other than the projector problem and the ladybug, everything went well. The audience seemed interested and engaged. At the end, I asked someone to come up with a summer kigo and David Lanoue suggested "sweat." So, I asked them to write a speculative haiku about sweat and we ended up with a ton of really cool poems.

I also handed out the Scifaiku sampler that Josh Gage

hooks_and_books prepared for me as a gift from the SFPA to the haiku poets in attendance.

Afterwards I watched Micheline Beaudry and Mike Montreuil do a presentation on "The American Identity of French-Canadian Haiku Poets." This was followed by the New Resonance Reading, moderated by Jim Kacian. There were 14 New Resonance poets in attendance, from volumes 1-6, and we all sat up in front together and each read five haiku. Jim read one haiku by every New Resonance poet not present, so the poetry of all New Resonance poets was represented. Then,I took a short break and went through the exhibit rooms at the National Archives.

John Stevenson and Angela Leuck led a Memorial Reading for all of the haiku poets who have died since the last Haiku North America. Angela would read each poet's name, their birth and death years, and where they were from. John would read a little biography of the poet, then they would each read a sample haiku from the poet's work.

This was followed by the Regional Haiku Readings, moderated by Michael Dylan Welch. California has a strong showing at the conference with seven haiku poets here. There are four poets from Japan and Angelee Deodhar is here from India.

Then, we broke for dinner. Naia, David Lanoue, Ian Marshall, and Luce Pelletier and I ended up at the Black Tomato, which has really incredible food. In fact, I haven't eaten a bad meal since I arrived!

On the way back to the archives, we unexpectedly stumbled by another ceremony on Parliment Hill. It was something called "The Retreat" which involved troops marching, bands playing, images projected on the Center Block building of Parliment, etc. We stopped and took lots of photos and made it back in time for the Carpe Diem Reading, which was accompanied by folk musicians Debbie Danbrook and Catriona Sturton.

Carpe Diem is a Canadian anthology of haiku of both French and English poets, published as a cooperative venture between Borealis Press and Les Editions David. It was really wonderful. Luce Pelletier read all of the French haiku and DeVar Dahl read all of the English haiku. As an odd aside, another ladybug found me. Eve Luckring told me I was lucky. Lenard Moore asked me if I thought it was a stalker ladybug.

shakuhachi solo
a ladybug claims the seat
next to me
Collapse