When life gets busy, there's more to blog about but less time to blog it!

At first, I was a bit disappointed, but as the day progressed it turned out the location had its own merits. It was a bit quieter without the distractions of the main garden. This meant that we had a lot more people this year who were willing to try to compose their own haiku.

We had several different projects, aimed at different age groups, spread across two tables. At one, for our youngest visitors, we had coloring sheets featuring a classic Japanese haiku with an illustration they could color. I would read the haiku to the children as they colored. We also had some blank sheets printed with Chiyo-Ni's morning glory haiku. We had an illustration showing how to draw a morning glory, but some children preferred to trace it.

At the second table, I had a stack of photos I had taken of the Japanese Garden over the years along with some 5 1/2 x 8 1/2 inch card stock. Each visitor to our table could pick one photo, glue it to the card and then write a haiku about the garden. We had several books of haiku on display, so some preferred to copy a poem by Basho or Issa on their card. One teenager copied her poem in Japanese.

Five members of the Southern California Haiku Study Group were on hand. Science fiction poet Kendall Evans stopped by and wrote a remembrance haiku for the koi who used to swim in that garden. I didn't actually write any haiku there, but have written almost a dozen about the garden in the last couple of days. 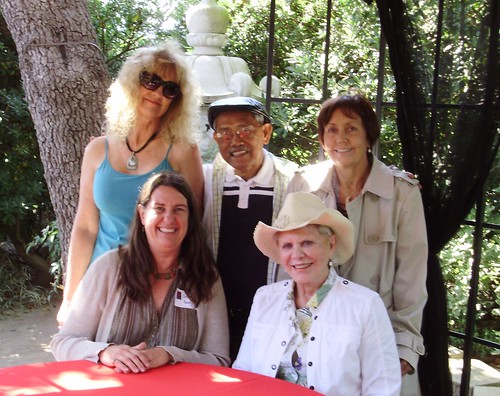 This weekend is Stoker Weekend in Los Angeles, almost timed perfectly for the blooming of the corpse flower at The Huntington.

Although I am not registered for the main events, I did drop by the mass book signing at Dark Delicacies last night.

The place was packed with horror writers, so much so that at times it was difficult to move around the store. It was set up similar to the Mystery Writers of America party I went to at the Mystery Bookstore in Westwood last April. There were drinks, snacks, tons of books to buy and tons of authors on hand to sign them.

The challenge, of course, was to find a book by the author you wanted to sign it, and once you'd located such a book and purchased it, then trying to find the author again! But, as a way to meet and mix with other writers, it was a blast.

Now, if I can only catch that corpse flower bloom....
Collapse