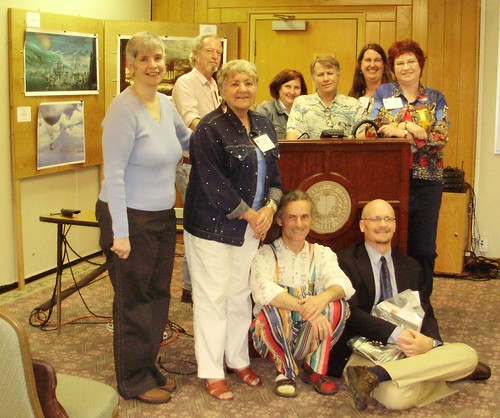 Originally, I planned to attend the entire Eaton Conference but life intervened and I ended up registering for a day, arriving around noon so I missed the morning sessions.

Walter James Miller's plenary address was an eye-opener. I had no idea that I had never read the real Jules Verne. I was shocked to learn that there are all these problematic translations out there. Translations where 1/4 of the book is cut, Vernes' scientific accuracy is compromised, and politics intervenes to re-cast events to match the political viewpoint of the early translators. Even though better translations now exist, these early bad ones are in the public domain which makes it attractive to publishers wishing to reprint them for easy profit.

Then, there were a series of awards. Fellowships were given to grad students to enable them to travel to the Eaton Collection for two weeks of research. Sheila Finch gave out the awards to the student short story contest winners. Ching-In Chen from UC Riverside won first place for her story "Kawanies, Colony" and Leah Williams from UC Santa Cruz won second place for her story "Elysium". Both stories and photos of the winners are on the UC Riverside website: http://eatonconference.ucr.edu/sssc.php

Then, it was time for the J.Lloyd Eaton Lifetime Achievement Award in Science Fiction which was awarded to Frederik Pohl. Unfortunately, Pohl was ill and unable to attend the conference this year, but he recorded a speech that we watched.

After a short break, we started the poetry reading. We had a dozen readers this year. I moderated and Samantha did a plug for the Science Fiction Poetry Association.

Karen Romanko read Greg Beatty's poem "eventual, I" from an advance release copy of Cinema Spec. This was followed by readings by Kendall Evans, W. Gregory Stewart, and Denise Dumars. Then, Denise called Kendall up to read a poem they wrote together. Sherri Benoun, who will be doing programming for Loscon in 2010 read a limerick and another short poem.

Next up on my sign-up sheet was "Frank L. Vignola" which turned out to be a composite name for the translation team of Gwido Zlatkes and Ann Frenkel, who read a fabulous poem by a Polish poet, accompanied by some sort of table accordian instrument. It was wonderful.

Howard Hendrix was next, followed by Samantha Henderson. Sheila Finch did a fine impersonation of Mike Allen, Alyssa Tobar read a haiku, and then Ching-In Chen, the student short story contest winner, read three wonderful poems. As I sat there and listened to her I couldn't help but think that we're going to be hearing more from this talented young writer.

I wrapped things up by reading four poems, "Lake Vostok" from Mythic Delirium 20, "Camera Obscura" from RavenElectrick and the upcoming Cinema Spec, "As the Moon Loses Its Smile" from Tales of the Talisman and the 2007 Rhysling Anthology, and "Poems from the New Symbiont" from Scifaikuest and the 2008 Rhysling Anthology.

Denise, Samantha, Karen, her husband Bob, Dick Nordrum of the Orange County Science Fiction Club, and I went out to Tio's Tacos, an amazing mecca of found art. There were several additions since last year, for example this beer bottle wigwam: