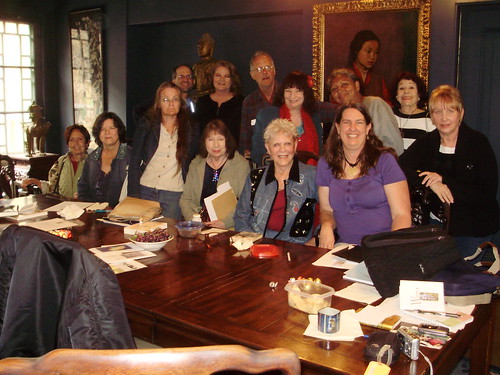 Today's haiku workshop and kukai at the Pacific Asia Museum was wonderful. We had a full room of poets - 15 in all. I baked up a kigo in the form of Irish Soda Bread which I brought with me, still hot from the oven. Someone asked about butter, which inspired the following:

We had a nice read-around of haiku. We had copies of The Essential Haiku edited by Robert Haas, Basho: The Complete Haiku translated by Jane Reichhold, and A Haiku Menagerie edited by Stephen Addiss for those poets who didn't bring haiku to read.

I had intended to also read from the latest issue of Wisteria, but we had to make sure we were out of the room by 4:00 p.m. due to a wedding in the courtyard. Lynn suggested that we walk over to Fuller Seminary and sit under the Wisteria and read from Wisteria after the meeting, but we ended up going to dinner instead.

There was a short kigo discussion. Here is the list of seasonal word prompts we came up with for the writing session:

33 haiku were entered in the kukai and it was fun to hear the variety of voices represented. Afterwards, we ended up at the El Portal restaurant outdoor patio, experiencing two of the kigo discussed...."daylight savings time" which made it possible for some people to stay longer in Pasadena and not have to drive home in the dark and "dining alfresco" because it was warm enough to do so!