I can't believe it has been two weeks since our haiku group had the haiku workshop at the Japanese Garden at CSULB. 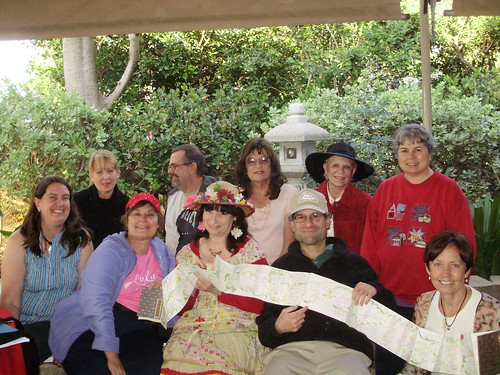 We were lucky, weatherwise. It was beautiful. The last two weekends have been overcast and rainy. The only mar on an otherwise perfect day was the missing koi. The garden pond has always had a huge number of koi - hundreds and hundreds of them, many as old as 30 years old. So many that they've always had an annual koi auction.

Apparently, the garden was stricken with a koi virus which killed all of them. I'm still sad about it. I have all sorts of memories feeding those koi with my kids. The koi would practically climb out of the pond to eat from our hands, their little suction mouths almost creepy in their eagerness.

The garden has seeded the pond with some baby koi, which tended to swim in concentric circles, so a lot of participating poets ended up with haiku about whirlpools of koi and since Kendall was there representing the science fiction poets, we even had some discussion of koi vortexes.