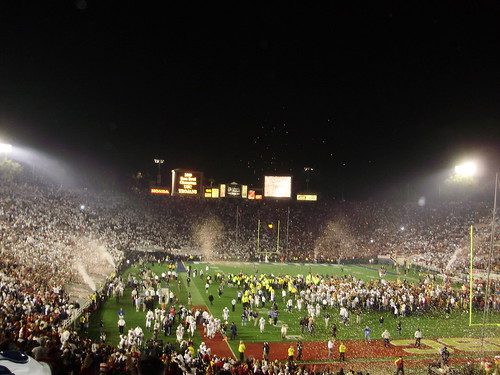 How do I describe actually being at the game? The scene above, filled with confetti and celebration as the game ended, pretty much says it all.

Needless to say, when the day ended with a 38-24 score, I went home a happy Trojan fan. We didn't even have to fight traffic, which was truly the one of the miracles of this New Year's Day.

By approaching the parade from the south (non-freeway approach), it was relatively easy to find parking, despite the other 700,000 people who lined the parade route. This number is down from the days when over a million people used to line the route, but 700,000 people still bring a lot of cars into neighboring streets.

Then, because the weather was great and we decided to walk from the parade to the game, we didn't have to worry about the other 93,000 people trying to get into the Rose Bowl. This took away a lot of potential stress which could have spoiled an otherwise parade perfect/football game day.

Pasadena is a pretty walkable city.

And I got to see the B-2 bomber fly overhead no less than three times...once at the parade, twice at the game.

accidental photo
of the row behind me
military flyby
Collapse