So much for trying to do eight consecutive happy posts during such a busy time of year. In fact, you might say I was so busy being happy I couldn't even post about it!

Yesterday was truly wonderful. The Rose Bowl final score was part of it, but seriously it was such a full day it felt like two days. So, I will post about the parade and the game separately. 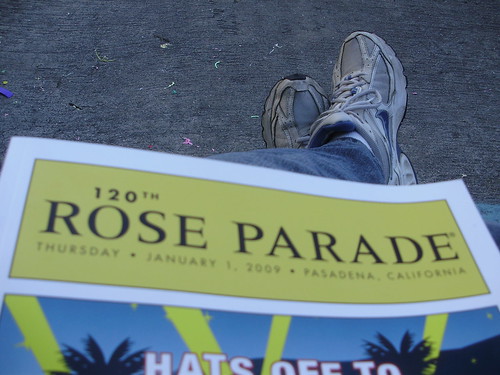 First, the parade. Most people who know me know the Rose Parade makes me happy. Long gone are the days of my childhood where I watched it on television all morning long on New Year's Day. Since 1980, when my ex first started working at the Ralph M. Parsons company as a junior in college, I've attended every parade except two. In those days we parked in the Ralph M. Parsons parking lot with free passes he got from his employer. Now, I usually park in a residental neighborhood near Allen, south of the parade off California Blvd.

When you live in the Pasadena area, parade excitement builds over a few months. The grandstands start going up along Colorado Boulevard over a month early. The Rose Queen is announced. Local children help decorate floats with their girl and boy scout troops. The night before, traffic becomes snarled on the way to your New Year's Eve party as the float builders stealthily start moving the floats into position under the cover of darkness. For three years in a row, I've been caught behind the Fiesta Float Builder floats since they move them in along Las Tunas Blvd. in Temple City, only a few blocks north of me.

On New Year's morning, I usually get up early and cook up a large picnic breakfast, filling thermos bottles with hot chocolate, hot apple cider, or coffee. I put canvas chair bags in the trunk of my car. This year, we started an hour earlier than normal because I wanted to be at a location further west than I usually watch the parade, to make it easier to make it to the Rose Bowl in time for the game.

So, we left the house at 6 a.m. and parked in a paid lot on Oak Knoll, two blocks south of Colorado. Usually we don't pay to park, but I wanted to leave the car there all day so I didn't want to take a chance with the 2 hour parking in the residential areas around Lake Avenue. We ended up sitting in front of Vroman's bookstore and we scored big this time. We actually managed to find a spot on the blue line without spending the night on the parade route. (You can see a bit of the "blue line" on the asphalt if you look to the right of the top right corner of the parade program).

This meant that once or twice the flag twirlers' flags brushed my knees as a large band went by.

The parade was shorter than usual (only 89 entries to keep it under 2 hours to appease the television networks) and the crowd seemed thinner. However, I happily sat in my USC chair in my front row position, yelled at the Penn State alums across the street, and contently watched the parade pass by from the best seat I've had in all my years of attending the Tournament of Roses Parade.

I was in wonderland. 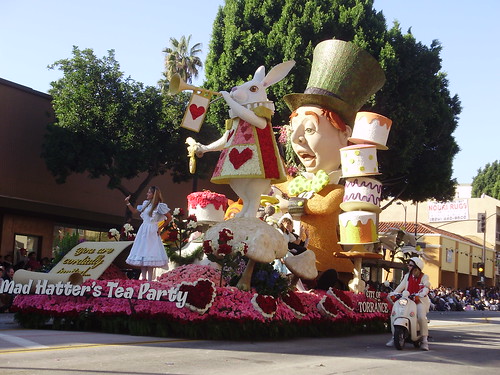